This year I had the opportunity to photograph some cosplay as internation media at the Tokyo Game Show 2014 in Japan and it was certainly an eye opening experience.  Read this blog to see what it’s like to shoot cosplay in Japan and see part 1 of the cosplay pictures.

Earlier this year I traveled to Japan, and went to Tokyo Game Show 2014 with the sole intention to shoot cosplay.  Prior, I’ve shot at numerous pop culture conventions in my home country of Australia, but this would be my first time shooting cosplay in a foreign country, and in Japan no less, the home of cosplay.  However this was not a hard core anime event, it was a electronic game centric event and while I saw on the events website there was cosplay hall, I still wasn’t quite sure what to expect.  I’m happy to say, I was not disappointed as to quantity and quality of cosplay, but at the same time I was also saddened and also maybe even a little disturbed by some of the behavior I witnessed at the event, but more on this later.

Tokyo Game Show 2014 took place at Makuhari Messe which is approximately a 50min train ride from Tokyo station.  Makuhari Messe is a large exhibition centre and the Tokyo Game show took all of 9 main halls.  My assistant and I walked in and were greeted by helpful volunteers who quickly directed to us to the international media registration desk.   An interesting point of difference in Japan is that cosplay photography is only allowed in specific areas. The reason for this is due to the large numbers of attendees that Japanese conventions have, if people were allowed to stop and photograph anywhere they pleased, it would be absolute chaos.  So with media pass in hand, my assistant and I made a bee line straight to hall 9 where both the cosplay and food were located.

Hall 9 was a large hall with about half the space dedicated to various food vendors, the other half of the hall was a large open space that lead outside to a fenced off area to where the majority of the cosplayers were.  Shooting cosplay in Japan is a very different experience than shooting cosplay back home in Australia.  Back home, I would wander around the event, see someone that I would like to photograph, ask permission, take a few pictures, say my thanks and be on my way.  In Japan, things are done rather differently.  As mentioned before, cosplay photography is only allowed in a special allocated cosplay area, in this case it was the area outside of hall 9.  Meaning that cosplayers in this area were there to specifically have their photos taken.

A cosplayer having arrived in this area, finds a open area and essentially claims it for themselves for however long their willing to stand and have their photo taken.  Photographers, (who obviously are also in this area) wander around finding cosplayers they want to photograph, and then amazingly (and this is so Japanese) they form neat little lines in front of each cosplayer.  By and large, each photographer patiently waits their turn to photograph and is given a chance to shoot the cosplayer on a one on one basis.

So I joined the line for a girl dressed in a outfit that I didn’t recognise but her outfit was great non the less.  When it got to my turn I introduced myself and thanked her for letting me photograph. (A standard exchange between each photographer and cosplayer at the start and thankfully I could speak a little Japanese and was able to communicate my wishes.)  She then informed me that I had 1 minute and asked if this would be ok? I said yes and she proceed to pose immediately.  I was a awe struck, each time I clicked the shutter on my camera, she would strike a new pose, nothing drastic, but just little changes in head, chin, eyes, hands that would make each shot different and unique.  After a few shots, she would change position entirely and give new poses again.  I shot at a furious pace, this girl knew how to pose and pose damn well she did.  After what seemed like a extraordinarily short amount of time, the timer (which she had set at the start) sounded and I said my thank yous and was on my way to photograph the next person.

This pattern continued on for several hours, luckily I had an assistant and while I was photographing one cosplayer, I could have my assistant stand in line for the next person I wanted to photograph.  I also noticed that the vast majority of cosplayers were girls. While this is true back home in Aus, the percentage of girls to guys cosplaying was definitely heavily skewed towards the girls in Japan, much more so than back in Australia.  I think in my entire day I only noticed a handful of guys in costume. So my day continued, from line to line and a flurry of shutter releases and hundreds of photos taken.

It was at this point I noticed that there something different now going on, with some cosplayers.  Instead of the aforementioned system of lining up to take photos, some cosplayers allowed the photographers to form a circle around them and effectively get extremely close.  At first I thought nothing of this as they were probably some particularly popular cosplayers allowing a greater number photographers to take photos.  It was then I took notice of the apparent age of one cosplayer and the types of photos some of the guys were getting which made my heart sink and both a little saddened and quite disturbed. As I skirted around this group of men (some quite old) I looked on the back of their cameras and saw the type of shots that many of the guys were getting.  There were a lot of shots focused primarily on the crotch of this girl. This was a vast majority of the photos, just guys taking pictures of a girl’s pubic area who if she was not underage, she certainly looked it.  I was really quite disturbed and wondered why the girls allowed this type of photography of themselves. I’m sure the girls knew what type of photos were being taken with lens mere inches away from body, but I also remembered that there are many cultural differences here in what is deemed acceptable in Japan and while I don’t like it, I also realised this was just the way things were, for she definitely wasn’t the only allowing this type of photography.

I decided to look past this behavior and focus on the other excellent cosplayers that were present.  I continued to photograph and was delighted by one of cutest family cosplays I’ve ever seen. Mother and children were dressed as Team 7 from Naruto featuring Kakashi, Sakura, Sasuke, and of course Naruto.  There were no shortage of cosplayers here at the event and was also delighted to see cosplayers lining up themselves to take photos other cosplayers.   Before I knew it was already late in the day and I hadn’t ate yet.  So after a hurried lunch, I decided I should see the rest of the show and wondered the various halls.

As for the actual exhibitions, it was relatively similar to what I had experienced back home, lots of booths and stalls and since this was a game show, lots of vendors and publishers allowing you to play their games.  The one exception was a display for what I think I recognised as the sequel to the Chanbara Beauty game.  By far this exhibit is the weirdest of all exhibits I’ve ever seen.  It involved a giant stand of a bikini clad Chanbara beauty with holes where here nipples should have been.  These holes were actually viewing ports in which the public would stick their head through and watch a demo of the game, but it also gave the impression of people suckling at the breast… well whatever the reasoning it seemed to work as the line was completely full and there was no shortage of people wanting to peak underneath her bra.. so to speak.

The following is the part 1 of the cosplay photos taken at Tokyo Game Show 2014, the rest of the photos in part 2 will be posted soon. 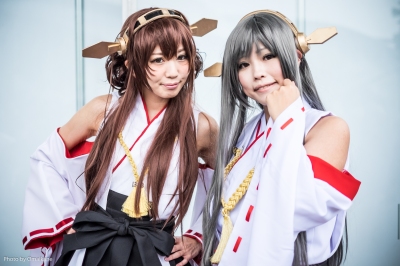 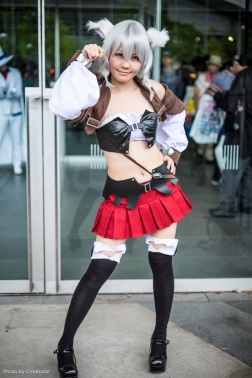 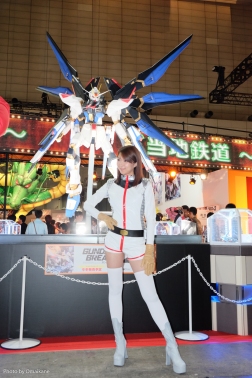 Oh how I wanted that Strike Freedom in the back

I wasn’t quite 100% sure but I think these girls may have being foreigners too. 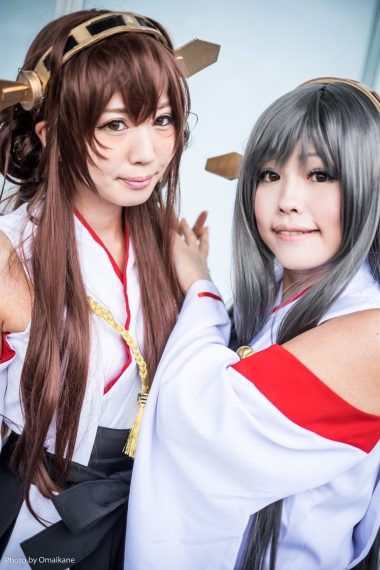 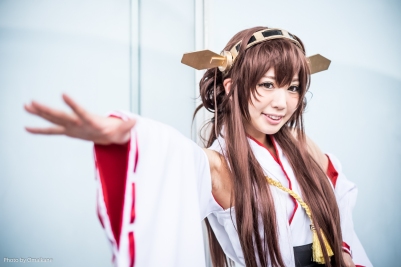 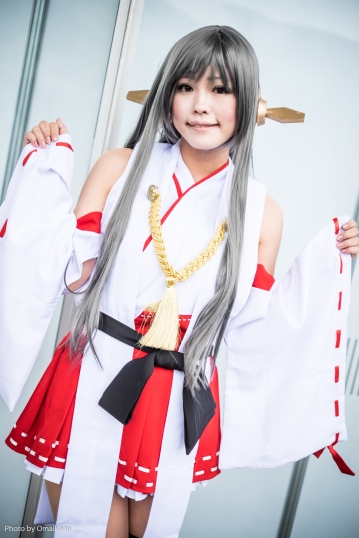 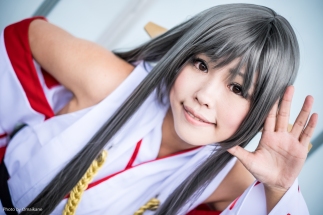 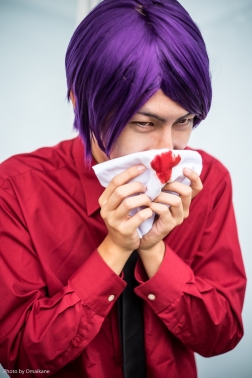 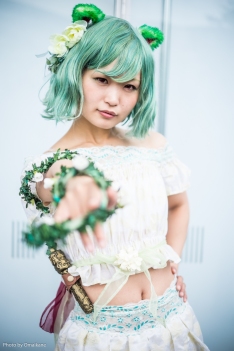 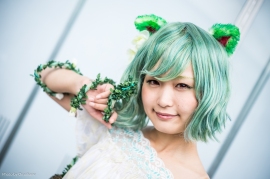 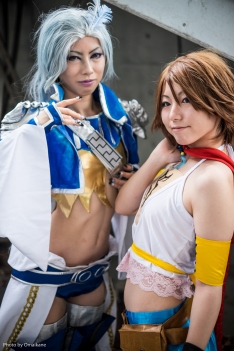 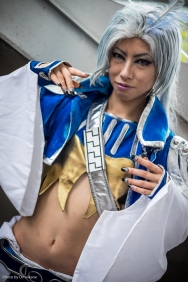 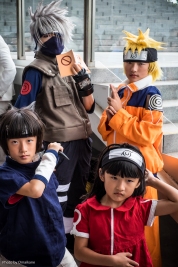 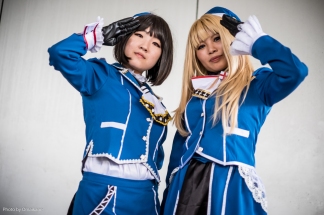 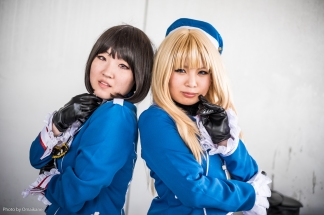 A throng of photographers surrounding cosplayers, some with very low angles. 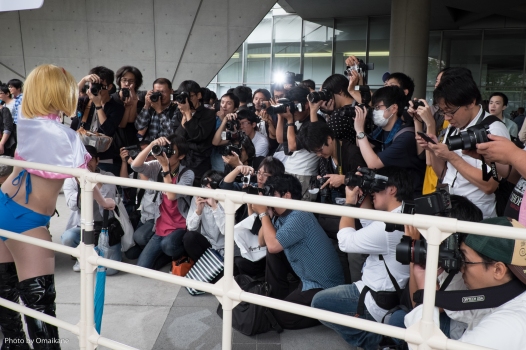 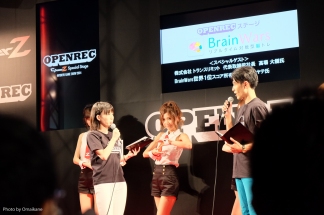 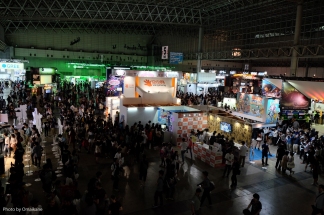 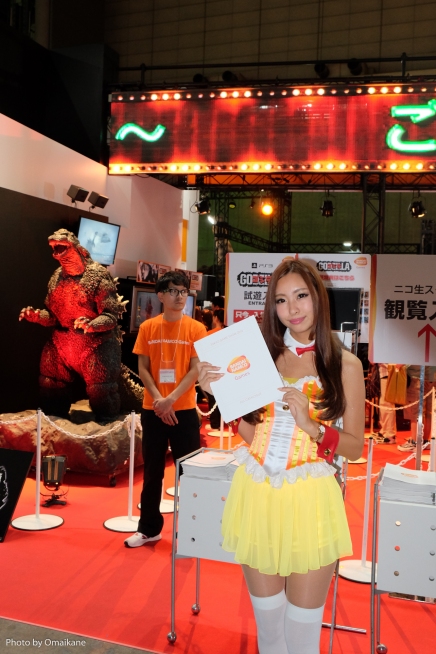 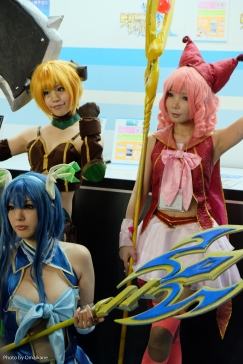 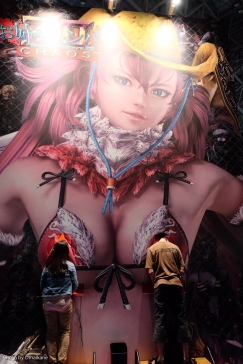 Taking the cake for weirdest display I saw at TGS2014 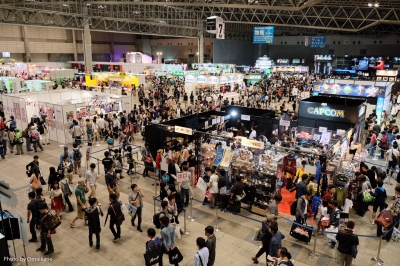 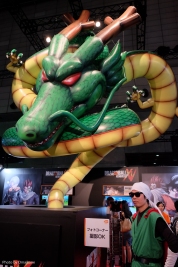 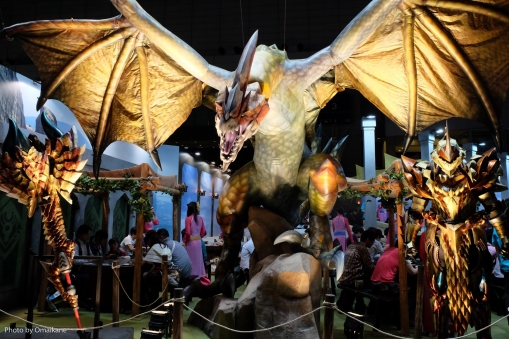 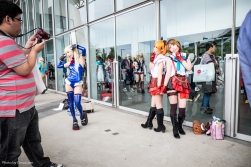 The start of the outside area containing most of the cosplayers 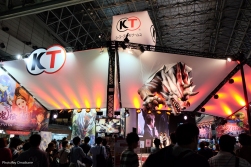